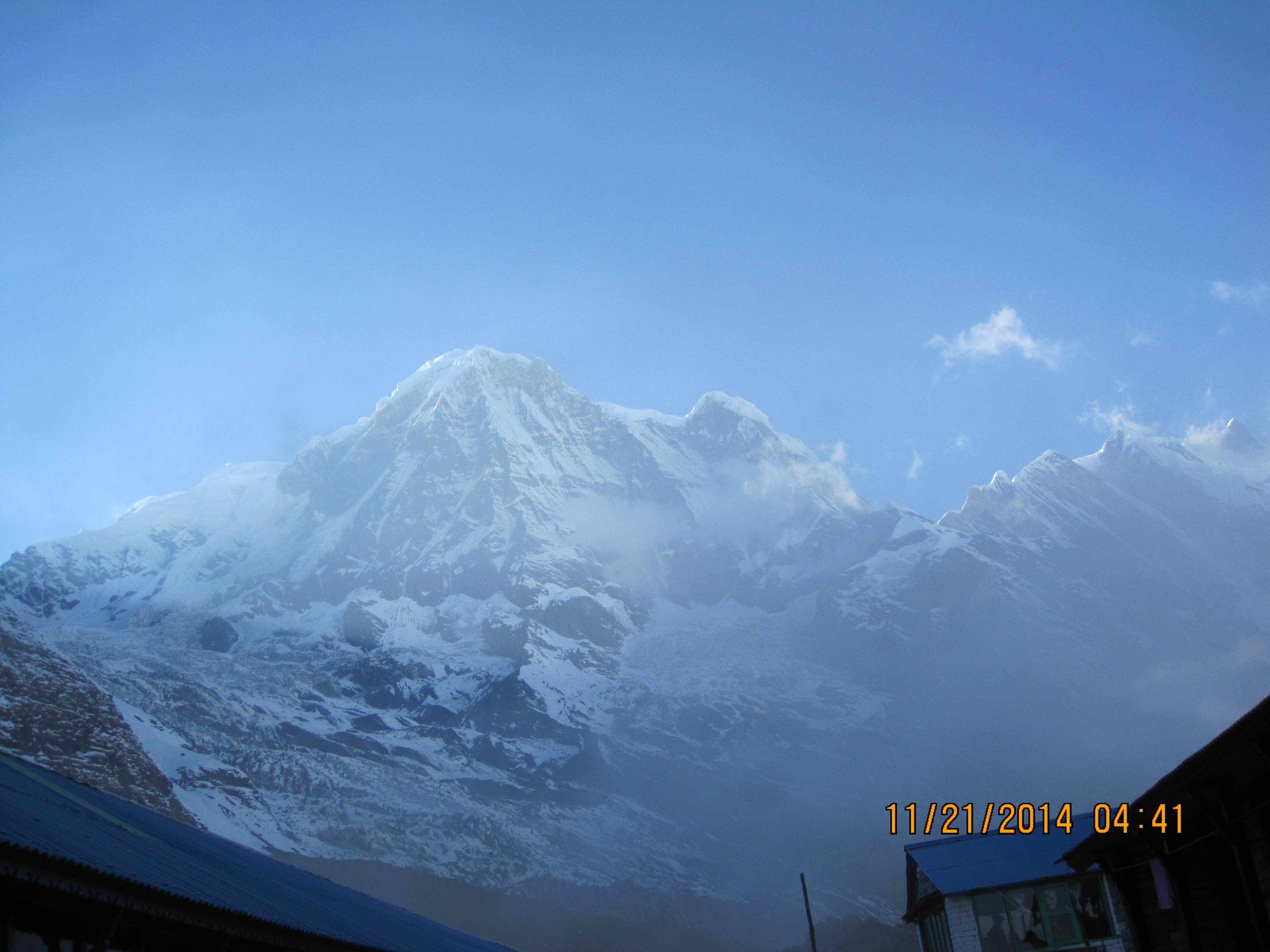 In the high season the lodge here can be packed with trekkers. Annapurna base camp tea house trek all the lodges have private rooms and decent loos and serve surprisingly good food, including high altitude apple pie. There’s little to differentiate the four lodges which are all well run.The Annapurna Base camp trek precinct is cold windy and often snowbound in spring the snow reaches the hotel roofs.

Trek to Annapurna base camp there are tremendous views of the near vertical south face of Mt, Annapurna towering above the Annapurna sanctuary to the northwest. The ascent of this face in 1970 was guide  by an expedition. Chris Bonington remains one of the most spectacular climbs of an 8000m peak. Mornings are usually clear clouds often roll in to obscured the peaks by noon, and then clear in the late afternoon.

As the trekkers marched west past the porter sheltered and volleyball court to a prayer flag draped viewpoint on the moraine for a spectacular view over the glacier nearby is a memorial chorten (Stone Buddhist monument)  to the well-known climber Anatoli Boukreev was  died in 1997 by an avalanche. Climbed the moraine behind the hotels for a fine valley overview.

Although the entire Annapurna region is harbor by Annapurna sanctuary trekking and Annapurna base camp trek short is often experience by trekkers. Several peaks accessible from its sanctuary is on the government official list of trekking peak Tharpu Chuli formally. Tent Peak (5663m) offers a commanding 360 degree view of the entire sanctuary. It’s higher neighbor to the north is Singu Chuli (fluted peak 6501m ) while on the south is Hiunchuli (6441m). All three of these peaks present significant mountaineering challenges.

Nepal entry visa fee
Kathmandu/Pokhara Hotel room and all accommodation such as Breakfast, Lunch and Dinner (B, L, D)
Kathmandu-Pokhara or Pokhara-Kathmandu, Domestic Airfare per person US$ 124 only (If you required)
Travel Insurance and medical evacuation in case of emergency
Personal Spending money

Incredibly amazing trek in Nepal Himalayas and when it comes to Rara Lake just out of this world aquamarine Lake, can’t explain the beauty in words, I feel so incredibly blessed that I experienced the real Mother Nature, it makes my heart single. Everything was arranged so well by Skyline treks.

A big thank to Mr. Madav Pandey, my trek guide Sanjay C and the support staff who worked greatly to make this trek very valuable memory for me.  Big hats off to you Skyline treks and family,

I hope to trek with you guys when I plan my next trek.

Annapurna base camp trek was one of the charismatic treks that I have done, besides world’s highest mountain the most significant thing of this trek is every day changing in landscape and surroundings and as well the very important part of this trek is that I joined with professional team of Skyline treks in such landscape.

This trek in Nepal Himalayas was my first trek with Skyline and experiencing the quality of service throughout the trek provided by the company and if I rate this out of 10 I should rate as 9.9. Dheeraz as trek guide gifted by Skyline to our batch, the amount of kindness and hospitality up in the mountains is not enough to recommend for the entire team of Skyline treks.

The trek in the direction of EBC which Skyline Treks and Expedition bestows us was worthy of attention due to numerous of snow capped mountains along with the massive worlds highest Mt. Everest which is the prime hotspots of the Everest region.

Over all our trek to EBC is almost too good to be true and this credit goes to our competent guide Sanjay who is all the time extremely helpful to us. We would like to urge if someone is seeking for Everest Base Camp trekking in Nepal then please join with sound great company Skyline Treks for your reliable trek and exalting hospitality.

Everest Base Camp Trekking in Nepal

Mr. Madhav and his very enthusiastic team are true ambassadors of the proud Nepali people, its culture, & heritage, and are a shining example of how perfect hosts should be. I (AceAuteur) came into Nepal as a tourist and left as if stepping out of home, to be back again soon. Thank you very much Mr. Madhav and all the staff of Skyline for a truly spectacular experience! See you again soon.

We Loi217 used Skyline Trek and Expedition for our first ever trek in Nepal to Everest Base Camp Trekking. Everything were well arranged, no hassle at all to us. Our mountain guide and porter are excellent, attentive, helpful and experience! We are very satified with this and appreciate their helps very much!